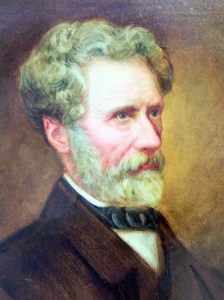 Swedish zoologist Carl Jakob Sundevall was born in Högestad, Sweden, on 22 December 1801. His early life and his personal and family history are not well known. We know he attended Lund University (in the city of Lund, in Southern Sweden, only 37 miles from his place of birth) , where — in 1826, at the age of 25 — he was awarded a PhD.

He then traveled to Southeast Asia, later returning to Lund to study medicine, and was awarded a Doctor of Medicine degee in 1830.  Apparently he found the practice of medicine not to his liking, as within three years he took employment at the Swedish Museum of Natural History, in Stockholm. There, from 1833 to 1838 his duties were obscure, but in that latter year he participated in the French expedition to Spitzberg, which was headed by Joseph Paul Gaimard (1796-1858).

On returning from that expedition, in 1839, he was made a member of the academy of sciences in Sweden, assigned the title of professor, and was made  curator (keeper) of the vertebrate section of the Museum, retaining that position until 1871, a period of 32 years. Although his greatest accomplishments were performed in the field of ornithology (he described 238 birds of Sweden, and produced a seminal study on the deep plantar tendons in the avian foot, which remains of great value to avian anatomists today), he made important discoveries in entomology and arachnology.