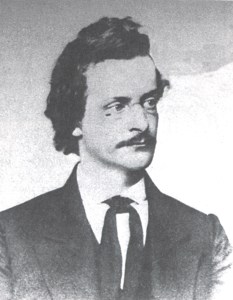 The American naturalist William Stimpson was born in Roxbury, Massachusetts on Valentine’s Day, 14 February 1832. He was the son of Herbert Hathorne Stimpson, and Mary Ann Devereau Brewer (who died while Stimpson was quite young). On his father’s side he came from what his biographer, Alfred Goldsborough Mayer, characterized as “old colonial and Revolutionary stock.”

Inasmuch as the linked biography, above, provides as excellent a review of Stimpson’s life as can be had, the viewer is directed to it for details of this man’s life.

Stimpson’s father was an inventor and Bostonian merchant. He invented Stimpson range (a cook stove), improvements to firearms,  and modifications to railway car wheels. His son was early on attracted to the natural sciences, which caused much consternation, as the elder Stimpson believed that a sure way to lead an impoverished life. William persisted, however, and ultimately spent his life as — yes — a poverty stricken scientist. He never earned a collegiate degree in the formal sense, but was, in 1860, awarded an honorary degree of Doctor of Medicine by Columbia University, in recognition of his services to science.