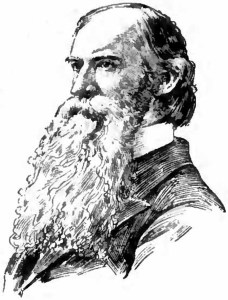 American geologist, physician, explorer, and author John Strong Newberry was born 22 December 1822, in Widnsor, Connecticut. He spent his early years in the Connecticut Western Reserve (the land claimed by Connecticut in the Northwest Territory, in what is today northeastern Ohio).

He graduated from Western Reserve University in 1846, then in 1848, after graduating from Cleveland Medical School, he traveled to Paris for further studies in paleontology and medicine.

In 1851, on returning from Paris, Newberry settled in Cleveland and established a medical practice. As with many physicians of the period with curious, inquiring minds, the practice of medicine failed to capture his undying love, and in 1955 he was enticed to join a War Department expedition to explore the country between San Francisco and the Columbia River. Apparently that experience was so satisfying that, from 1857-1858 he served on another expedition to explore the Colorado River, during which time he became the first geologist to visit the Grand Canyon.