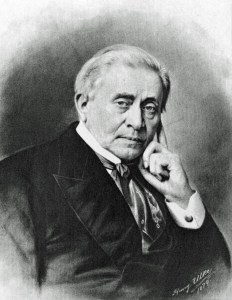 American scientist Joseph Henry was born on 17 December 1797, in Albany, New York. His parents were poor Scottish immigrants (William and Ann Alexander Henry), and because his father died while Joseph was quite young, he was sent to live with his grandmother, in Galway, New York for the remainder of his childhood.

Galway, N.Y. is located in the eastern fifth of the state, halfway between New York City and New York’s northern boundary. The hamlet of Galway was sett;ed in October 1774, after being formed from the town of Ballston; it was incorporated as a village in 1838. The elementary school Henry attended in Galway is presently named in his honor.

After school, he labored at a general store and, at 13, started an apprenticeship as a watchmaker and silversmith. A love for the theater propelled him into acting, a vocation he wished to pursue professionally. However, once his interest in science was sparked, at 16, from reading the book “Popular Lectures on Experimental Philosophy,” he inclined toward a career in medicine instead. At 22, while still impoverished, he obtained a scholarship to The Albany Academy, supporting himself while there via private teaching and tutoring. When, in 1824, he was appointed as assistant engineer for a survey of the State road between the Hudson River and Lake Erie, his interests turned from medicine to engineering. In 1826 he became professor of mathematics and natural philosophy at the Albany Academy. where he remained until 1832, when he was appointed professor at Princeton.

In 1846 he became the first Secretary of the Smithsonian Institution, where he remained until 1878.

Joseph Henry is perhaps best known for his work on electromagnetic induction, his service as first Secretary of the Smithsonian Institution, and his founding of the National Institute for the Promotion of Science.