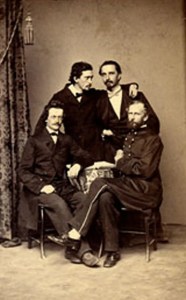 From 1857-1866, during what can rightly be described as among the most productive of times at the Smithsonian Institution, an informal association of some of the Smithsonian’s brightest and most dedicated scientists flourished, shone like a mighty comet, then — about as suddenly as it was formed — extinguished.

Marine biologist William Stimpson (1832-1872) is recognized as the club’s founder. Though he never earned a college degree in the usual manner, he was a man of great intellectual vigor, and possessed of an infectious good humor. These traits propelled him to found the Megatherium club, and are reflected in the club’s name and in the popular name for his modest Washington D.C. abode, which often served as the club’s meeting place: “The Stimpsonian.”

Much has been written about the excesses in drink and revelry that attended the informal meetings of the club. And those stories are probably all true. Including the fact that Joseph Henry, Secretary of the Smithsonian, evicted these scientists from their quarters at the Institution because they were too loud, ran sack races in the great hall on days when inclement weather kept them inside, and serenaded his daughters.

Still, the overriding fact is that the club served as a means by which the genius of these individuals could periodically be channeled away from the depths of science — and the tendency for those engaged in such work to take themselves too seriously — to the lighter side of life’s experiences, letting off steam in essentially harmless ways, enjoying a healing camaraderie that helped balance their perspectives.

It helped keep them sane. More than that, it helped them maintain the mindset that all good scientists must have: that peculiar amalgam of intelligent inquisitiveness combined with an impetuous disdain for the stultifying effects of formalized strictures. And it helped them deal with the complexities of mid-19th century life, in the years leading to, and during, the American Civil War.

In Mayer’s biographical memoir of William Stimpson, published in 1918, the author claims that the Megatherium Club was “the more social” of two scientific associations founded by Stimpson, the “more serious organization” being the Potomac-side Naturalist’s Club. Mayer lists as members of the Megatherium Club, besides those mentioned above, (Addison Emery) Verrill (1839-1926), Dukman, (Albert) Ordway (1843-1897), Wood, (George Henry) Horn (1840-1897), (William More) Gabb (1839-1878), “and others.”

Stimpson chose, for the club’s name, the generic epithet for an extinct giant sloth that had roamed South America as recently as 10,000 years ago. This animal, whose body was the size of an elephant, was distinguished as one of the largest mammals that ever lived, and it is that feature which likely inspired Stimpson’s choice. At the time, a single species, Megatherium americanum, was known, having been described in 1796 by the French naturalist and zoologist Jean Léopold Nicolas Frédéric Cuvier (1769-1832). Presently, six additional species are recognized.

The purpose of the club was succinctly stated by Stimpson in the following words:

“What more noble pursuit for immortal souls? Riches? War and butchery? Political chicanery? Superstition? Pleasure? What we seek is the truth!”

And what is the truth? It can rightly be said that no one knows, and we agree. But it is not so much what it is that matters, as the conscious spirit it foments in the brains of its pursuers. For the scientist, that spirit (1) spurns the sacred cows of yesteryear, (2) favors an open-minded curiosity and skepticism, (3) is ever willing to examine new evidence, and consider fresh — even radical — ideas, (4) refuses to relegate new scientific discoveries to the shelf, to await more receptive minds in future genertions, insisting instead (5) on applying those discoveries to their work and lives at once.

In other words, the pursuit of truth implies a willingness to take great strides beyond oneself and one’s generation. It is this character, so brightly illustrated in the Megatherium club, that forms the foundation on which the Megatherium Society stands.